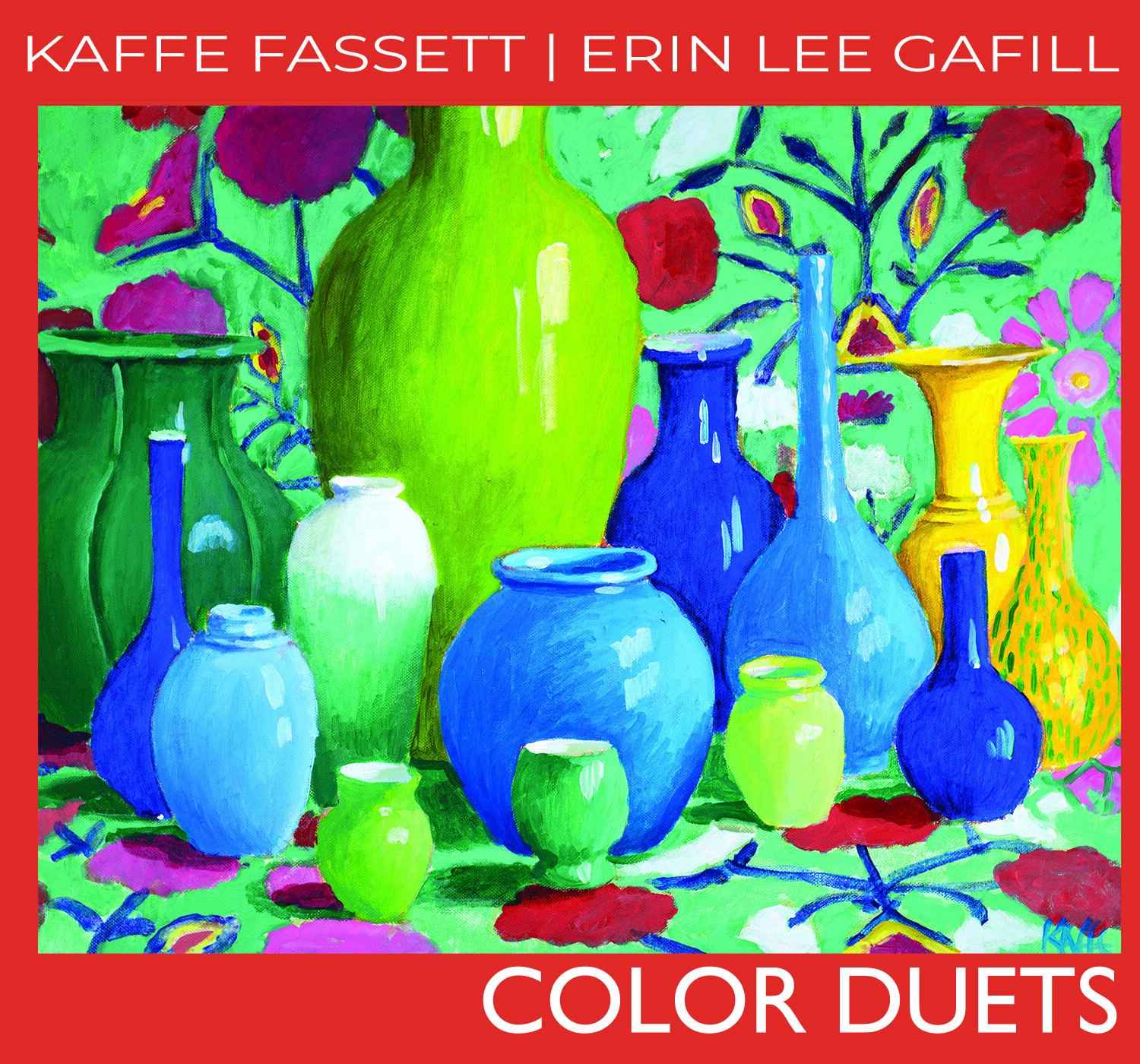 Color Duets is a new book of original artwork, textiles, and family stories. It memorializes a series of artist retreats shared by Kaffe Fassett and his niece, Erin Lee Gafill over the last twelve years.

Two artists in the thick of noted careers celebrate beauty through color and pattern. Each works tirelessly to create work expressing their individual visions, while touring the world evangelizing to the faithful their message: “You, too are a creative spirit.”

For over twelve years, they have come together each May in the home where they both spent their formative years. They retreat to a cabin in a redwood grove across the highway from Nepenthe in Big Sur, California. In this stolen week, they sit side by side, surrounded by palettes, easels, brushes, and paints. They observe and render the nuance of color and form as the canyon light illuminates selected groups of vases, pots, and flowers.

Kaffe Fassett has led an extraordinary life and is a world renowned textile artist. Born in 1937, he spent much of his youth in Big Sur, California, where his parents bought a cabin from Orson Welles and transformed it into the world-famous Nepenthe restaurant, a gathering place for artists and bohemians. After attending a boarding school run by the disciples of Krishnamurti, an Indian guru, he studied painting at the School of the Museum of Fine Arts in Boston, then traveled to England, where he made his home. After an inspiring trip to Inverness, Scotland, Fassett began designing knitwear for Bill Gibb, and then the Missonis, Vogue magazine, and private clients like Lauren Bacall and Barbra Streisand, and, in the process, revolutionized the handknitting world with his explosive use of color. Further explorations led him to needlepoint, mosaics, rugmaking, tapestries, yarn and fabric design, costume and set design, and quilting. Fassett continues to produce new work and to travel worldwide to teach and lecture, and has recently collaborated with Coach New York.

Erin's roots in the arts run deep. Her great-great grandmother was Jane Gallatin Powers, who had the first artist's studio in Carmel, and who, along with her husband Frank, created the artists' colony which today is Carmel-by-the-Sea. Her grandparents, Lolly and Bill Fassett built Nepenthe Restaurant in Big Sur, the legendary watering hole for artists, poets, writers and bohemians. Erin herself has co-founded the Big Sur Arts Initiative, a non-profit arts education organization, and in 2001 was chosen to the first American artist-in-residence at the Hamada International Children's Museum of Art in Hamada, Japan. Not only a writer, Erin is a talented painter and gifted teacher whose work is collected internationally.